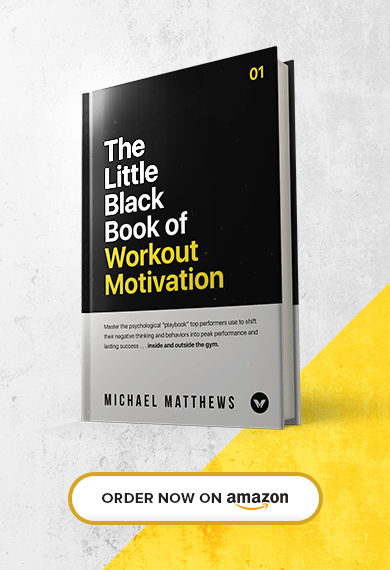 Read on to discover the psychological “playbook” that top performers use to shift their negative thinking into peak performance and lasting success...

Have you ever gotten into your car after a long day at work, and even though you promised yourself you’d hit the gym, you head straight home for the couch instead?

Have you ever been unable to stop hitting the Snooze button every morning (instead of the gym)?

Have you ever been secretly afraid that you just don’t have what it takes to really change your body and life?

Have you ever struggled so much to get fit, healthy, and happy that you wondered if you should simply give up?

If you answered “yes” to any of those questions, I understand. I’ve been there myself.

Years ago, I was stuck in a rut in the gym, I was making minimum payments on tens of thousands of dollars of credit card debt, and I had no idea where I should go in my life, let alone how to get there.

Today, I’m a “super-fit” bestselling author with over one million books sold, and the owner and founder of several 7- and 8-figure businesses, including Muscle for Life, Legion Athletics, and Waterbury Publications.

(And perhaps more importantly, I also found a unicorn for a wife who has given me two kids who are kinda the coolest.)

How the hell did all that happen?

Did I sell my soul to the Dread Lord Cthulhu? Discover the one weird trick to melting belly fat, debt, and existential angst...in just 5 minutes per day? Develop an expensive but highly productive cocaine habit?

I read scores of books, worked thousands of hours, and overcame more setbacks than I can count. In other words, I did the hard stuff that most people don’t want to do, and I’m ready to share the biggest lessons I’ve learned along the way.

And now, while I don’t know everything about personal growth, I do know what it takes to develop the skills, habits, and spirit required to transform your body and life.

I also know that anyone can use these powerful strategies to overcome the biggest mental and emotional blocks holding them back from realizing their potential in the same way that I have.

No matter who you are or what difficulties you’re facing, you can empower yourself to have the body you want to have, become the person you want to be, and live the life you want to live.

That’s why I wrote this book.

It’s my personal—and 100% practical and hands-on—blueprint for personal transformation, inside and outside of the gym, and it will provide you with new and valuable knowledge and skills that you will use for the rest of your life.

In short, I wrote this book to help you fix the important things that are holding you back from doing and achieving the things you care most about.

To do that, I share wisdom and insights from hundreds of scientific studies and dozens of legendary artists, authors, entrepreneurs, philosophers, generals, and conquerors, as well as my own biggest “a ha” moments that are most responsible for where I am today.

For instance, what if I told you that filling out one simple little sentence could increase your chances of achieving a goal by 100 to 200 percent?

What if this sentence worked subconsciously to automatically reduce your need for motivation, willpower, or desire?

And what if you could use this sentence for all types of goals, including exercise, diet, health, and everything else?

Thanks to the work of a number of psychologists over the course of a decade, this sentence exists, and it has three parts: what, when, and where.

This sentence was the focus of a study conducted by researchers at The University of Bath, who randomly assigned 248 adults to one of three groups.

No, that’s not a typo. By simply writing when and where exercise was going to occur, follow-through skyrocketed.

Similar results have been seen in other exercise studies, as well as research analyzing a variety of positive behaviors ranging from breast self-examination to dietary adherence, condom usage, breast and cervical screenings, vitamin supplementation, alcohol intake, and more.

What–when–where statements are far more effective for regulating behavior than relying on inspiration or willpower to strike at the right moment, because they speak the brain’s natural language, creating a trigger-and-response mechanism that doesn’t require conscious monitoring or analysis.

That's just a small sample of the practical, evidence-based knowledge you’re going to learn in this book.

Here’s a sneak peek of what else you’ll discover...

Now, as much as I believe this book can change lives, it’s not for everyone.

It’s not for people who are happy coasting on cozy goals and pleasures, and who are contented by merely buying and consuming things that others create.

It’s not for people who want to languish in a fool’s paradise and avoid the ground truth about positive change—although ultimately rewarding, the process is often hard, draining, boring, and even depressing.

It’s not even necessarily people who are “unmotivated,” because in my experience, this is very difficult to change.

Instead, this book is for people who have a burning desire to be, do, and have more, and who could use some help with the “how.”

In short, this book is for people who want to be better than they are right now.

People who have a vision for their bodies and lives, and who are driven to break free of artificial limitations and realize their unique talents and fulfill their true potentialities.

It’s for people who hate feeling like they’re moving in slow motion, who don’t want to surrender to the deadening effects of exhaustion, listlessness, and inertia, and who want to develop the physical, emotional, and spiritual strength and energy needed to look and live vigorously.

It’s for people who are driven to heal what’s unhealthy, fix what’s broken, and improve what’s lacking, and who believe that no matter the circumstances, something can always be done about it.

It’s for people who want to feel in control of their destinies and who want to reach their graves with stories worth telling.

If you’re one of these people, then this book was written for you.

It’s going to inspire you with compelling ideas and stories, and empower you with a set of reliable, science-based principles, strategies, and habits that have been proven to work with a broad range of personalities and produce sustainable, long-term results.

Armed with the information you’ll learn inside, you’re going to start living life with more energy, enthusiasm, and nerve.

You’re going to develop a powerfully new paradigm for interacting with yourself and your environment.

And if you really take these lessons to heart, you might just enter a transformative period of your life and discover that you’re capable of far more than you ever thought possible.

So, don’t miss this golden opportunity to learn what most people will never know about developing the mindset, skills, and determination required to win, inside and outside of the gym.

Click the button below, buy this book today, and by the end of it, you will never again wonder what it takes to get and stay motivated to build the body and life of your dreams.

Matthews has hit it out of the ballpark with this Little Black Book. This is not your typical ‘rah rah’ self-help book full of tired clichés. It’s a unique, meticulously researched and compelling combination of storytelling, science, and practical tools and takeaways.

This is a good, helpful, important book that establishes Mike as the Jordan Peterson of fitness. Any person who wants to train more effectively will benefit from reading it between sets, and will never give a copy to the guys he wants to beat.

The word goal should be a verb, because a goal
without action is just a dream. The Little Black Book provides all the tools you need to turn your goals into reality — and to never, ever feel ‘stuck’ again.

Mike has already taught us how to be bigger, leaner and stronger—and it works. Now he teaches how to be BETTER in all areas of life. A concise, indispensable guide to fitness and effectiveness.

Mike Matthews brings you motivation, guidance, advice and a plan to better yourself in a humble, yet authoritative way. You know he has your best interests in mind as you read this, and you will feel he is talking directly to you.

This book will challenge you, it will make you think, it will force you to go outside your comfort zone. It will help you build much more than motivation, but an inner drive to succeed so you can weather any storm.

In the charlatan-packed world of the fitness industry, Mike Matthews is a breath of fresh air. This book will inspire you and inform you with quality applicable information that isn’t biased. If you want to improve your physique and your life do yourself a favor and read The Little Black Book.

I love Mike’s writing. Backed by a sh*t ton of research, crystal clear and always actionable.

Mike Matthews delivers another gem. The Little Black Book is chock-full of unbiased, evidence-based knowledge that you should not live without. A must-read.

Read this book and absorb and apply its wisdom, and your life will get better. It’s that simple.

Matthews is a master of the mental side of fitness, so you’ll finish this book fired up to get to work—and, more importantly, with the practical tools you need to start your journey successfully.

Enter your first name and email address below to unlock the first three chapters of The Little Black Book!